The harsh lands that are the Untamed Kingdoms makes the warriors there extremely fierce and only the best rise up to lead the clans war parties. This unit represents human warriors of the untamed kingdom, male and female warriors armed with large powerful axes. Great weapons are a favourite of many units because they can fell even the most armoured of opponents. These figures represents a regiment set of a hero and his personal guard complete with totem standard and musician.

The leader is a mighty warrior with a fur cloak and a grizzled look carrying a massive two headed axe.

The standard bearer sports a fine plaited beard and leather armour, he carries the warband’s impressive standard with its trophies hanging from the polished tusks of a mammoth. He also carries a two headed axe. The male musician carries a large trumpet made from a mammoths horn.

The three female figures carry powerful axes which are slightly smaller than the males but no less effective, their clothing a mix of fur, leather and mail. 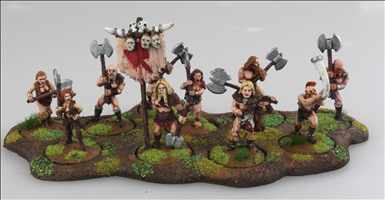